The visiting convert from Greenpeace, Patrick Moore, has completed his Sydney visit with presentations at the Centre for Independent Studies and at a public forum.

“Patrick enthralled everyone tonight with a most informative & eloquent presentation at Club Five Dock after doing the same thing at the CIS at St Leonards”. 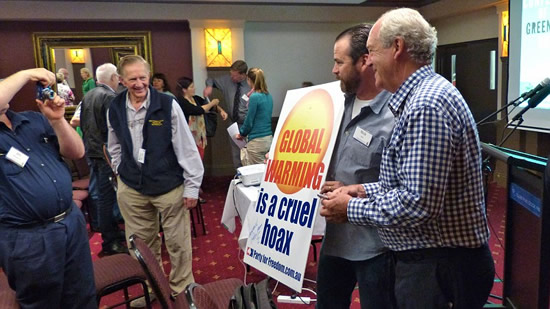 One couldn’t help feeling, watching the interview of a former national security adviser on 7.30 last evening on the shoot up in the Canadian Parliament, that either Canada or the chap interviewed are behind the ball game in understanding the threat from Islamic jidahists. He opined that

The general feeling in Canada is that it is a safe and peaceful country and that jihadist terrorism, Islamic extremism doesn’t have much, if any, traction.

Yet leaving aside the question of how a chap carrying a gun managed to get past security, Canada has a higher proportion of Muslims than Australia (3.2%) and the Muslim religion is the second largest religion after Christianity – and the fastest growing. A cursory examination reveals considerable numbers of mosques and prayer rooms. All persons convicted under the 2001 Canadian Anti-Terrorism Act have been Muslim and a number have gone to fight in Iraq/Syria. But the chap who did the shooting was not one of the 90 high risk travellers that the police had been investigating despite the fact that he had a long list of convictions. 7.30 interviewer (Sales) also seems to have done minimal homework before conducting the interview.

More importantly, this Canadian IS inspired incident (and a not dissimilar one in Jerusalem) supports the view I have been taking – that  the source of the problem is the Muslim religion and its practitioners. This needs to be publicly recognised by political, business and church leaders, and action taken against advocates of violence (such advocacy  appears to made an offence in the next round of counter-terrorist legislation). It is absurd to say that religion doesn’t allow such action: it does and, in some versions, encourages it.

But Canadian examples or not our old friend The Age is calling for a redraft of existing legislation.

My letter published in The Australian attempts to put the Whitlam eulogising in context. History is constantly being re-written but it will take more time to get the Whitlam period right.

Excitement aside, Whitlam blew the economy (Letter published in The Australian, 24 Oct 2014)

As a senior Treasury officer during the Whitlam government it was fascinating to hear former Treasurer Keating tell Tuesday’s 7.30 report that it was an important change from “the years of the torpor of the Menzies era”. Never mind that Australia’s per capita economic growth was higher than the OECD average from 1950 to 1973 or that this occurred with a much smaller federal government than Whitlam left behind in 1975.

Of course, it was exciting, momentarily, to experience the spendathon which was reflected in the increase in total federal government expenditure of 83% over the two years following 1973-74 (“Fiscal chaos  as new era dawned”, 22/10). Never mind the jump in inflation and interest rates or the doubling of the unemployment rate.

According to Keating, Whitlam had “no real help from the Treasury”: in fact at a crucial time he put aside budget advice from Treasury and Labor’s outside advisers and went on an overseas tour.

There is certainly much to learn from the Whitlam era but there are few signs that either major party has recognised the importance of smaller government and allowing private enterprise a much greater role.