Today’s front page of the Australian Financial Review carries the composite photo below of Malcolm Turnbull seated on a couch with Bill Shorten and Nick Xenophon and Pauline Hanson standing at the back. The accompanying (very) glossy magazine purports to present them as four of those in Power in Australia. In its subsequent pages the magazine includes many others, along with, surprisingly, Muslim Waleed Aly. President Obama is added for good measure, possibly because it is the last chance to do so.

Referring to Malcolm Turnbull, one of the Writers claims that “when he seized the prime ministership from Tony Abbott a little over a year ago … we considered ourselves, briefly, the lucky country again. We had a new prime minister, a man of intellect, a businessman whose career had developed largely outside the political bubble. On his shoulders rested the hope that he would bring to an end the decade of dysfunctional politics”. But “by early 2016 no agenda had appeared that would crank up confidence and investment. Instead there was umming and ahhing on a GST and the date of an election. So the Australian polity slipped back into a mood of scepticism, if not cynicism. The underlying frustration could be summed up as: Where the hell are we going?” 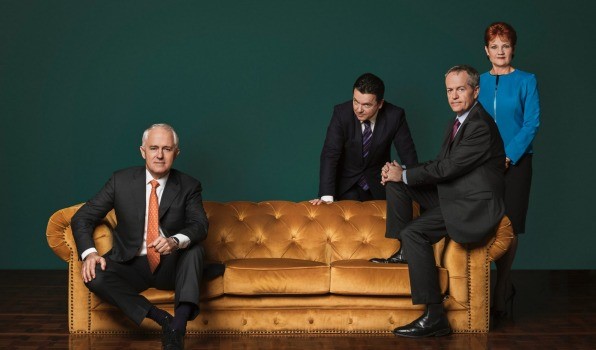 Separately, in The Spectator Australia former Treasury Secretary, John Stone, argues that “with Turnbull as its leader (sic) the Coalition is headed for defeat at the next election” (see below). “So the party’s first conclusion has to be, get rid of him; and with that once agreed, the sooner the better – ideally, not later than December as Parliament is getting up for the Christmas –New Year recess”. Stone points out that of the 56 Liberal Party MPs who supported Turnbull last year, only 36 of those are now in the remaining total of 83 and he judges that the best replacement would be Tony Abbott. He has “the national and international stature, the energy, the self-deprecating sense of national duty and the solid set of Liberal community values”.

Stone’s assessment today follows Andrew Bolt’s article yesterday after the drop from 52 to 48 in the Coalition’s TPP Newspoll (see Bolt on Polling). He argues that “LIBERAL MPs are in denial. The latest poll shows they have a Prime Minister who’ll trash almost any cause they claim to believe in. That’s not just because Malcolm Turnbull isn’t really a Liberal. It is also because he just can’t sell. Whatever Turnbull is for, a lot of voters instinctively feel they should be against”. The Bolt article contains an arranged photo of Malcolm and Lucy walking down a train platform and looking as though they owned it. On TV news that day they also had an arranged photo taken inside the train but with others in the same compartment showing no interest that they were there with Australia’s PM and his wife. As previously mentioned, such set or arranged photos did not impress while Turnbull was meeting “world leaders” and do not now. 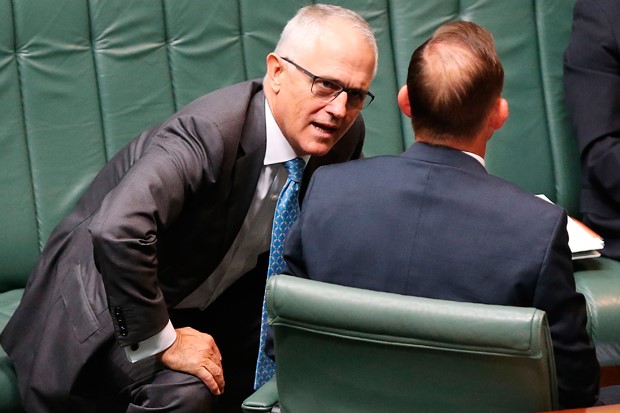 How long, O Lord, how long?

In ‘Del-Con Notes: Election Post-Mortem’ (06/08/16) I surveyed the Liberal Party catastrophe wrought by its supremely narcissistic leader and concluded that, ‘Sooner or later, Turnbull will have to go’. The question is, how soon? First, though, let me explain why, henceforth, anything on this general topic will appear as ‘Dis-Con Notes’ rather than ‘Del-Con Notes’. The reasons were set out in the Australian just before the election (‘Dis-cons don’t seek revenge, but to teach party a lesson on loyalty’, 29/06/16), and the standfirst for that article summed them up: ‘We [i.e., we conservatives] are not deluded but disaffected and we won’t vote for Malcolm Turnbull’. Three days later, nor we did; and three years hence, should Turnbull still be Prime Minister, nor will we again. So let’s consider Turnbull’s political longevity via, first, some history, and second, by analysing the political logic of the Liberal Party’s present plight. As George Santayana said, ‘those who cannot remember the past are condemned to repeat it’. In May 1989 the parliamentary Liberal Party replaced John Howard as Leader of the Opposition with Andrew Peacock. Ten months later, he lost an election that, with bank bill rates at 17 per cent and a recession looming, should have been unloseable, and which John Howard, with his better campaigning skills, would have won easily.

The first lesson from that was that politicians who seek the Prime Ministership merely because they believe they are entitled to it do not become successful leaders. The second lesson is even more relevant. When Peacock, post-election, resigned the leadership, did the parliamentary Liberal Party then admit their earlier costly error and re-elect John Howard? No. Under pressure from the Melbourne corporate establishment, to whom John Hewson had promised a Goods and Services Tax, they elected Hewson, and three years later he lost what again should have been an unloseable election, trying to deliver one. Hewson clung on until toppled in May 1994 by the self-described ‘Dream Team’ of Alexander Downer and Peter Costello. Finally, having got it wrong three times since its original error, the parliamentary party returned Howard as leader in January 1995 and won a smashing victory a year later.

As to the current situation, the Liberal Party now desperately needs a leader who, while maintaining its ‘broad church’, can do two things: regain the votes of all those ‘Dis-Cons’ who, according to Mark Textor, ‘had nowhere else to go’ on July 2 last, but who showed him, in spades, that they did; and who possesses the fundamental decency to bind up the wounds within the parliamentary party created by last year’s coup. Malcolm Turnbull is capable of neither. Late last week our journalistic savants, almost without exception, were telling us that Turnbull had had ‘the best three weeks to date of his Prime Ministership’. As one headline blared, ‘Malcolm has got his mojo back’. Really? Tuesday’s Newspoll, taken just as all those views were being aired, saw a sickening slump in the Coalition’s primary vote (down 3 points to only 38 per cent – below Labor’s 39, and even a point lower than when Tony Abbott was dismissed); a further 4-point slide in Turnbull’s net satisfaction ratio (down 4 points, and 8 points worse than Bill Shorten’s); and a sharp reverse in its two-party preferred position (from level pegging to a 4-point lead for Labor). The inescapable truth is that with Turnbull as its leader (sic) the Coalition is headed for defeat at the next election. So the party’s first conclusion has to be, get rid of him; and with that once agreed, the sooner the better – ideally, not later than December as Parliament is getting up for the Christmas-New Year recess. For that to happen, a consensus has to form on his replacement. If any acceptable alternative were available, a majority of the Liberal party room would probably not look to Tony Abbott. Of the 56 ‘Mark of Cain’ Members and Senators who supported Turnbull last year, 36 remain in the now shrunken party room of 83, and today’s politicians, like those of 1990, don’t like admitting mistakes. So the search for the necessary replacement has to focus on whether any alternative to Abbott exists who possesses those two aforementioned qualities. In my opinion, none does.

For reasons set out in ‘Del-Con Notes: After Turnbull, Who?’ (11/06/16), neither Scott Morrison nor, still less, Julie Bishop has any chance of bringing back the ‘Dis-Cons’ or binding up the internal party wounds. (Bishop, indeed, is already preparing the ground for exiting the Parliament before the next election, seeking a job for the girls somewhere within the United Nations and its appurtenances). And Morrison has more recently rendered himself even less acceptable by his superannuation policy shambles. So neither of them will do, and while several younger members will in time have claims to make, they are all too young and too recently in the federal Parliament for their claims to be seriously considered now.

Only Tony Abbott possesses the qualities required. It is not merely that he possesses ‘the national and international stature, the energy, the self-deprecating sense of national duty and the solid set of Liberal community values’, but he is also a man of instinctive generosity of spirit, one capable of forgiving most – though obviously not all – of those who previously betrayed him. With a rejuvenated leadership, and the ‘Dis-Cons’ flooding back (that ‘lesson on loyalty’ having been well and truly taught), the Liberals would again be in a winning position, with Bill Shorten’s vulnerabilities to an outstanding campaigner like Tony Abbott obvious. I have no vote in the Liberal party room; but if those that do are incapable of seeing these lessons of history, and the inexorable logic of what they need to rescue themselves, even more of them will depart at the next election, and we shall have – God help us! – a Labor government.

The Increased Threat from Muslim Extremists

I have previously referred to reports from the Gatehouse Institute, an American Think-Tank with a President (John Bolton) who was US Ambassador to the UN under President George Bush. The most recent Gatehouse reports have drawn attention to a worrying increase in France and the Netherlands in attempts to impose sharia law on non-Muslims. I forwarded these two reports to Rev Mark Durie, an Anglican priest who specialises (if that is the correct word) in identifying the extent to which the adherents of Muslim religion are penetrating and trying to impose restrictive behaviour in the Australian community. His comments are included in the attachment (Re: France’s New Sharia Police) and express the view “Europe is headed for a civil war” and that “the later the confrontation happens — whether in the form of war, or just more robust government — the higher the likelihood of ultimate Islamic victory and dominance”. This gives additional weight to the article by John Stone in Spectator Australia arguing that “ the growing threat from the more extreme adherents to Islam make it essential that… we face up to the task of positively discriminating against such people”in immigration policy and that “it should extend to people coming from all violence-prone cultures – think Somalia, Sudan and numerous war-torn West African nations – the kind of people now making Melbourne’s streets so dangerous”.