Yesterday’s The Australian detailed the bias we all know already exists at the ABC: in this instance our reference point is a TV presentation by ABC Four Corners, apparently approved by editorial director Sunderland (and with no reference to the almost invisible “new” CEO Guthrie). This presentation obviously grossly distorted the behaviour of the Nauruan community and the standard of government facilities in Nauru and, hence, its unsuitability to accommodate “refugees” trying to come to Australia. The ABC (and its sister SBS) are well known supporters of the refugee cause.

Today’s The Age, which adopts a similar view, reports that the ABC’s director of news  has “hit back” by claiming that it told the “important story” of more than 100 children living on Nauru by “relying on remote interviews and the testimonies of staff” because, it claimed, Nauru routinely refuses access to journalists and charges prohibitive fees for media visas. Sunderland is reported as saying “we don’t launch inquiries into excellent pieces of journalism”! Such comments are of course typical of the ABC’s handling of issues on which it holds fixed views, such as global warming. A letter published in today’s The Australian argues for cuts to funding for the ABC.

ABC News has also been publicising views that the use of wind power was not the cause of the SA black out. Yesterday’s 41 page update on the blackout by the experts running the Australian Energy Market Operator (AEMO) does include a statement that “the most well known characteristic of wind power, variation of output with wind strength (often termed ‘intermittency’), was not a material factor in the events of 28 September”. But AEMO also acknowledges that the system was supposed to accommodate wind speeds of up to 120 km/hour, which does not appear to have been exceeded. Indeed, according to Graham Lloyd in today’s The Australian,  the Bureau of Meteorology told a Senate committee earlier this week that the storm was a “pretty standard southern low-pressure system” and he also drew attention to AEMO’s report that damage to transmission towers occurred after the blackout. While references are also being made to the settings of wind farms which automatically turn them off or reduce their energy contribution when the wind is excessive, and there are reports of adjustments now being made to those settings, this suggests at a minimum that the system was not properly tested beforehand. It also suggests that security of electricity is uncertain when the wind is high unless there are sizeable back-ups from coal and/or gas fired generators.

The reality seems to be that, while even the “experts” don’t know why the blackout occurred, there is a problem with the usage of renewables. It is significant that the AEMO update repeats its earlier statement that “A detailed report including reliable recommendations for action can be expected to take up to six months considering the complexities of the matters involved”. If there were no inherent problem, AEMO would surely have said so. Bear in mind too that public comments by any observer need to be read in light of their possible views about global warming and possible legal claims being made against those directly involved in advising and operating the SA system, including the government itself. However, as to the latter, the Premier and one of his ministers are overseas escorting a large number of business representatives to meetings in Paris and London designed to attract investment and trade.

Meantime, The Australian has also editorialised (before the release of the AEMO Update)  on some of the implications of the target set for renewables by the statement made by Queensland’s Energy Minister Bailey (see Editorial on Qld Renewables) on its target of 50 per cent for renewables by 2030. This has been followed by the warning from Stanwell Corporation, which is government owned and which provides 40 per cent of the state’s coal fired generation, that a cost-benefit analysis needs to be made about the adoption of such a target, all the more so as Bailey said there would be no shut downs of coal/gas fired generators. The claim by Bailey that security of electricity supply will be maintained suggests he has learned nothing from the blackout in South Australia, where even the energy minister there warned some time ago that the state’s use of 40 per cent of renewables exposes the state to a recurrence of blackouts. Analyses by other experts caution against any extensive use of intermittent energy sources where a group of generators is operated at synchronous speed. A limit of 25 percent may be optimal.

Last week-end my attention was drawn to an Inquiry being held on the Paris Agreement by the Joint Standing Committee on Treaties at Parliament House. I decided to make a submission to the Inquiry by forwarding to the Committee the  presentation I made to a meeting of the Australian Institute of International Affairs on 14 April 2016 on Dangerous Global Warming –Fact or Fiction? The Limits of the Paris Accord. I noted that the presentation I made had been well received and that it was relevant because it questions the usefulness of the Paris Agreement and, as such, is directly relevant to the Inquiry. I drew attention to the following points:

I  added that since my presentation to the AIIA in April there has developed a recognition that it may not be desirable to continue with the policies now utilised by various countries and involving the substitution of the use of renewables  of wind and solar for the use of fossil fuels to provide energy. If this becomes confirmed, it may require reductions in the targets set by governments to reduce emissions of CO2.

Following the publication of temperature figures for September, climate analyst Dr Ken Stewart has updated the graphs he compiles from satellite measurements since 1979, from which he calculates the trend for 100 years ie what would happen over the 100 years after June 1995 if the same temperatures were repeated since that date. The trend figures vary from country to country and as between the different areas of the world. For Australia the trend calculation of the figures since June 1995 show no increase. This despite a substantial increase in CO2 emissions. 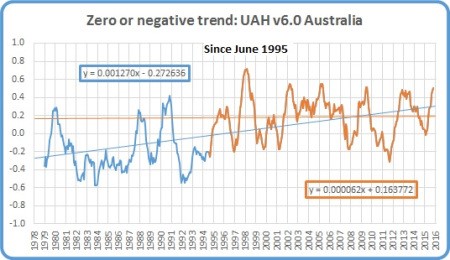