Victorian Police Commissioner Ashton stated that the charging of five men with the threat of implementing terrorist acts in the centre of Melbourne was based on evidence that they intended to undertake an explosive event and use other weapons indiscriminately. It appears the police had been aware for some time that they had been planning terrorist action and had concluded that, when some of them were recently seen visiting possible targets (including St Paul’s Cathedral), it was time to arrest them. Ashton claimed publicly that they were “self-radicalised, we believe, but inspired by ISIS and ISIS propaganda.” He also said four of the five were Australian-born with a Lebanese background and”there is another suspect in this matter who will be charged that was an Egyptian-born Australian citizen. All the others were Australian-born”.

The bottom line here is that these men, and almost certainly others associated with them, are jihadists who believe in killing non-Muslims and are prepared to become suicide bombers to do so (and also kill some Muslims deemed not in the “right” sect too). I have not seen any reports about their families and their attitudes but the fact that more than a “lone wolf” is involved suggests the self-radicalisation process is well and truly available through prayer rooms and the like in Melbourne suburbs (there appear to have been links to Western Sydney too). The “inspiration” from ISIS confirms that the extremist Islam message is world-wide and influencing behaviour here. The charges make it an offence to do any act in preparation or planning for a terrorist act. If found guilty they could face life in prison, provided the judge maximises the sentence.

Below are photos (?) of three of the men currently held in custody. Media also showed photos of women dressed in niqabs (total coverage of head). 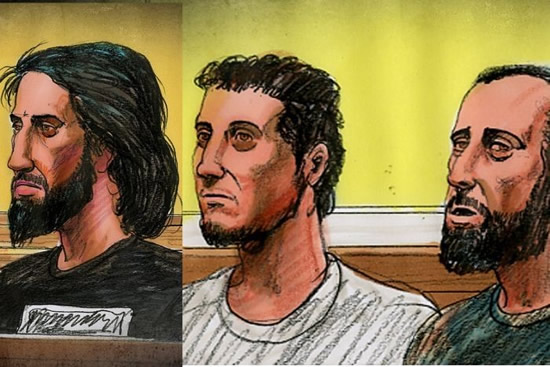 Prime Minister Turnbull held a press conference on Friday with Minister for Justice Keenan and the Australian Police Commissioner (see Turnbull Press Conference on Islamist Threat). His comments included the following
“This is one of the most substantial terrorist plots that has been disrupted over the last several years. I want to thank the men and women of the police in Victoria, the Australian Federal Police and ASIO and other agencies, for their work in thwarting this terrorist activity which was an Islamist terrorist plot inspired, as the Victorian Police Commissioner just observed a moment ago, by Daesh or ISIL. It has been a very complex investigation and it speaks volumes for the competence and professionalism of our police and security agencies which are the best in the world”.
Turnbull’s recognition of “an Islamist terrorist plot” is a vast improvement on his initial denial when he became PM of the religious influence.

Unfortunately, Victorian Premier Andrews failed badly when he said “This is not an act of faith. What was being planned, what will be led in evidence, what the police will allege, was not an act of faith, not an act of religious observance, it was, instead, in its planning, an act of evil, a criminal act”. It clearly involved a threat to the Christian religion. The Victorian Opposition leader, Matthew Guy, also made only a constrained critique of the threat (see Melbourne Islamist Threat Not Religious).

Also, even though the Islamists clearly included St Paul’s Cathedral as a possible target I have been unable to find any statement of substance about the threat by our religious leaders. One wonders if they see any threat to the religion they proselytise.

The Turnbull government has been supported by Labor in securing the passage of amendments to tighten security legislation. As indicated in (Improved Legislation Combating Terrorism),

“since September 2014, the government has passed eight separate tranches of national security legislation that have either amended existing offences, created new ones or extended far-reaching surveillance, arrest and control powers to security agencies. Beyond secret intelligence operations, figures from the Australian Federal Police show police have arrested more than 40 suspected terrorists under changes to the law that lower the threshold for arrest in terrorism cases. Police have also begun pros¬ecuting people for the newly created offence of advocating terrorism”.

Nonetheless, much more needs to be done, particularly in regard to making the advocacy of terrorism an offence severely punished. And, in addition to further tightening of offences both political and religious leaders need to make public statements rejecting those who support sharia law and jihadism, and explaining why they are rejected. It should be explained that such support constitutes an attempt to undermine Western values and change the basis of life in Western countries.

As pointed out below by Andrew Bolt, a much stricter control over immigration is also needed. Thanks to the border control policies introduced under the Abbott government there is now a wider recognition of the importance of controlling all immigration in order to minimise the risk of allowing extremist Islamists into the country. But it is not clear that existing controls are adequate.

The recent incidents in Germany illustrate the problem with an open borders policy such as that adopted by Merkel. It has been reported recently that a significant proportion of those who so entered Germany may have to be deported. As indicated by Mark Steyn in the this article published in the Herald Sun before the Melbourne arrests, the increased risk of terrorist activity also requires a large expansion in police and security agents and even that does not stop the terrorists who are motivated by opposition to Christianity and western values generally.