With the end of the Parliamentary session it is timely to assess the status of the Turnbull government and the latest “achievements” of a Coalition which offers itself as  a provider of small government.

Will Turnbull’s Polling be Lifted?

The last Newspoll on 20 November showed the Turnbull Government with a TPP of 47/53, the exact opposite to what it was on 23 Nov in 2015 and down from the 50/50 TPP as recently as 12 September. Judging by what happened last year, there will be another poll in early December ie very soon. This should provide an indication of the extent to which, as Turnbull claimed in addressing the Party Room on 29 Nov (see Turnbull on Performance),  “we are delivering … on the National Economic Plan” (sic). It will be recalled that, after an extended eight-week official campaign period and with the first election under a new voting system for the Senate that replaced group voting tickets with optional preferential voting, the Coalition lost 14 seats in the 2 July election. It is left with only a one seat majority and a Senate with 11 cross-benchers of diverse views (and 35 Labor/Greens and 30 Coalition).

Turnbull’s address to the Party Room on 2 Dec included claims of “delivery” since the July election on:

The media has given a general assessment that Turnbull has made modest progress in reforms since the July election and that he can claim to have justified the double dissolution election on Labor’s refusal to pass legislation restoring the ABCC and improving the Registered Organisations arrangement to upgrade the applicability to unions. However, even with Turnbull’s many TV appearances it would be surprising if the Coalition’s TPP has improved.

First, the process of obtaining of the passage of legislation on the ABCC and Registered Organisations exposed the weakness of the Coalition’s support in Parliament and the resultant horse-trading is unlikely to have appealed to the electorate. The headline to Paul Kelly’s article in the Weekend Australian – TURNBULL’S VICTORY AMID SENATE BEDLAM – paints the picture.

Second, and more importantly, the substance of the changes is minimal from a reform perspective. In the attached article in the Weekend Australian, economic analyst Judith Sloan concludes that the Turnbull government has failed to “safeguard the use of taxpayers’ money and to talk to them in frank and honest terms” (Sloan on Turnbull 3 Dec 2016). On the budget, I was surprised to learn that the claimed  budget savings “were already on the books” but, whether they are or not, there has been no attempt to either reduce expenditure or present the case for doing so. Yet Sloan gives examples of where there are obvious cases for spending reductions and/or a tightening of eligibility – child care funding, breaches of the work test for the Newstart Allowance (the dole), and loans for vocational education (for which a new scheme was legislated on 2 Dec). No attempt has been made to explain the broader need for reducing middle class welfare: indeed Turnbull has praised the importance of the middle class and, notwithstanding his public support for “small government”, he is in reality not a supporter.

Sloan also rightly argues that, with the changes made to the ABCC legislation after the Party Room meeting, the new regulator will have a minimal effect in reducing workplace relations problems. Importantly, the ABCC applies only to the building and construction industry (although now including offshore oil and gas projects) and major problems in other industries will continue (it is reported that Turnbull has indicated –at last – that some attention will be given in 2017 to the Heydon Royal Commission analysis).

In the construction industry itself, the changes made because of Senate negotiations mean that builders with current enterprise agreements, or whose agreements have expired, will not be able to change to the new “freer” (less regulatory) construction code until November 2018. The fact that one such prominent builder whose EBA has expired is already faced with rolling strikes and further industrial action by the CFMEU confirms that the industry will continue to experience serious union-inspired problems.  In any event, builders seeking to use the new code will first have to advertise vacant positions in Australia (so as not to give preference to possible temporary employees from overseas); new procurement rules will apply to projects worth more than $4 million;  maximum civil penalties are tripled  but the amounts of $36,000 for individuals and $180,000 for bodies corporate will not deter disruptions by powerful unions;deals between employers and unions stopping the ABCC from taking legal action are outlawed; there will be an increase in the oversight of ABCC and its use of coercive powers. In short, the “reformed” ABCC still contains an excessively regulatory system which will limit the capacity of building employers to negotiate with potential employees who are not unionists and will continue to inhibit negotiations with unions too.

Sloan’s conclusion is that the ABCC is now “a lamb duck with expensive, onerous and protectionist appendages… this is a case (where) a win is a loss”. Turnbull will almost certainly find it difficult in 2017 to claim he implemented a significant reform.

Turnbull did not say anything about climate change to the Party Room but he has adopted a strategy of attacking targets for the usage of renewables which he and Environment Minister Frydenberg rightly regard as “excessive”. These include the 50% targets of Federal Labor and those also adopted by the three Labor states of Victoria, South Australia and Queensland. He has been (unintentially) helped by the further blackouts in South Australia (which already use 45% renewables) and by BHP even deciding for once that it needed to make a “political” statement critical of the SA government after its Olympic Dam project was out of power for about 10 days. Colleague Jim Brooks, who lives in SA, has sent the following comments on the further blackout there and the reactions of SA Treasurer, Koutsantonis:

The problem with Turnbull’s policy position is reflected in the following comments he made in a radio interview on SA’s 5AAA:

PRIME MINISTER:  “Well you’ve had a state Government that has pursued renewables from an ideological point of view. Again I want to be very clear about this, I am totally non-ideological about renewables versus fossil fuels versus any other source, solar, wind, etc. All of them can contribute to our energy mix and all of them do. But you have to take the ideology out of this. Take that Left ideology that somehow or another we can pursue these enormous energy targets. I mean Bill Shorten wants to have a 50 per cent renewable target. He has no idea of how to get there. He has no idea of how that will maintain security, no idea of what it will cost. No idea of what it involves. These are big ideological statements and what happens is when they get converted into government policy, you start to get the problems that you’re facing now. So the targets have got to be, and this is why we have Dr Finkel, the Chief Scientist, undertaking the review that Josh Frydenberg has set up. The focus has got to be on achieving those three goals – security, affordability and meeting your emissions reductions” (see Turnbull interview with 5AAA).

Thus the supporters of renewables are said by Turnbull to have failed to take account of security and cost, and have “no idea of how to get there”. But the Turnbull government has failed to say anything about the adverse effects on costs of adopting its renewables target of 23.5% for electricity generation by 2020 (7.4% in 2014), ahead of most other countries. Nor, of course, has it attempted to justify the policy of reducing CO2 emissions to prevent the supposed risk of dangerous global warming by 2100. With the likely change in US emissions policy under Trump, such a justification is now badly needed.

In my Commentary of 30 Nov I reported that the NASA satellite showed a fall in average world temperature of 1C since the middle of the year. This was sourced from the UK Global Warming Policy Foundation and published in Sunday Mail in London. It now appears that this was mistaken and, according to Roy Spencer’s satellite-based temperature for the lower atmosphere, there was in fact a slight increase in November. However, the graph still shows a large fall since the El Nino peak earlier in 2016. 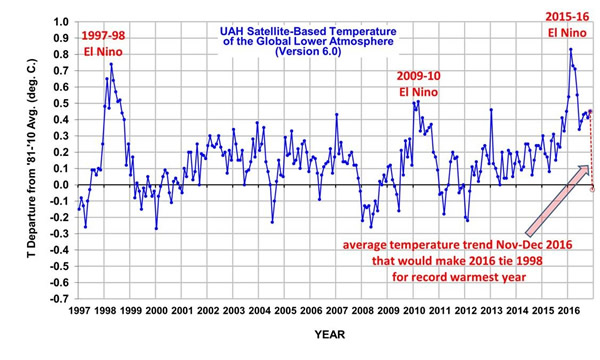