Has Turnbull found a policy to stop his and the Coalition’s decline in polling? Many commentators have certainly reacted favourably to his latest initiatives on energy policy and his claim that we are confronted by an energy “crisis”. But this is little more than a political ploy designed to retain his leadership. The whole exercise adds to concern over that.

Turnbull’s initiatives (sic) are an attempt to persuade voters (and his Coalition colleagues) that his leadership is needed to overcome the problems with current energy policy. Yet those problems reflect deficiencies in federal policy under Turnbull. They could be overcome by announcing a change in Australia’s climate policy, which it would be timely to effect now that the new head of the US Environment Protection Authority, Scott Pruitt, has indicated that he does not accept that carbon emissions are a major cause of temperature increases. This is not an isolated comment but reflects the view of many who have undertaken climate analysis over many years. It includes some well regarded US climate scientists who have publicly supported Pruitt’s perception, one pointing out that “calls to limit carbon dioxide emissions are even less persuasive today than 25 years ago”. Numerous Australian climate scientists agree and some have signed petitions disputing the dangerous warming thesis. In the US over 30,000 scientists have done so. So much for the supposed consensus: it reflects a “group view” and is out of date.

The reality is that the only energy crisis is the one created by Turnbull: Australia has ample supplies of energy. But the realisation that there are limits to the use of renewable (mainly wind) means that there is now a political crisis facing Turnbull and the Coalition in handling the shortage (sic) of fuels which federal policy has created and which continues to apply. This will continue unless the Coalition changes its leadership to someone who understands that the usage of fuels which emit carbon are not a major cause of temperature increases and who recognises that there is no scientific consensus on the actual causes. Such a person would also recognise that it is highly likely that the actual increase in Australian temperatures over the past century or so has been much less than the increase published by meteorological agencies (one expert analysis I have seen suggests no increase).

The immediate energy problem is caused by Federal legislation which stipulates that the source of electric power must move to 23.5% renewable by 2020 ( it is now about 10%). Some states have even adopted policies requiring up to 50% usage of renewable sources, which is also federal Labor’s policy.  Accompanying such policy requirements is the now widely accepted belief that Australia must move to a position where coal ceases to be used as a source of energy. This belief is widely held in the business community and amongst political leaders. But it is fallacious and fails to recognise that the accumulation of beliefs that the use of coal is dangerous is like the taboos against certain types of behaviour or food used in primitive communities.

As Andrew Bolt has pointed out (see Bolt on Crazy Schemes), the claim by greens that fracking is dangerous has stupidly led to it being banned in some states. Yet it has unlocked vast gas reserves in the US and has been ticked by the Australian and NSW Chief Scientists. It is astonishing that both major parties in Victoria have banned its use for gas exploration and drilling. As Bolt says,  “now, big surprise, we’re running out of gas”.

Let us look first at the proposal to increase by 50% the  production of the Snowy River scheme, which Turnbull claims as having the capacity to expand (although there could be environmental problems).  According to Turnbull, the only thing missing is “leadership and money”. In true leadership style he claims  “My government has both”. And as if to spread this, he even sent me (and doubtless many others) a media release containing more detail, including the following:

“Just a quick email to let you know about the announcement we made yesterday to start work on a game changing plan for power prices: the plan for the Snowy Mountains Scheme 2.0. This unprecedented expansion will help make renewables reliable, filling in holes caused by intermittent supply and generator outages. It will enable greater energy efficiency and help stabilise electricity supply into the future. This will mean cheaper power prices, fewer blackouts and more money in the pockets of Australians” (emphasis included).

But such assertions about the expansion do not seem to be based on any detailed examination, let alone the cost benefit analysis which Turnbull has previously advocated for infrastructure projects. The estimated cost of $2bn seems little more than a back of the envelope guess and, as such, is open to Opposition and other questioning. Astonishingly, the feasibility study will only be completed “before the end of the year” and  until that is available the claims made in the quote above have no credibility. When asked on 3 AW radio “what if the feasibility says it’s a dud”, Turnbull replied “well, it won’t say that”, to which the questioner remarked well “what are you having it for”?.

That the whole Snowy project was questioned right at the start from an economic perspective makes it highly dubious that the expansion will result in greater energy efficiency et al. Nor were the two States which are partners in the Snowy scheme given any prior notice of the announcement (as Thursday night’s 7.30 report confirmed in an interview with Energy Minister Frydenberg in which he tried to dodge the issue). True, NSW and Victoria subsequently gave the proposal a good-idea tick, but said nothing about whether they would contribute.

Beyond all this, that it will take at least 4 years to complete means it will not alleviate the present alleged energy “crisis”.

A fair conclusion would be that, as existing federal and state policies deter any private sector investment in coal-powered electricity  and as the Coalition has to have a policy on wind/solar power at a lower level than the Opposition’s, Turnbull has decided it is politically necessary to announce that the Commonwealth government intervene directly in a one-off production of electricity from hydro power at what looks like a high cost but which will be declared feasible after an examination by we don’t know who.

In his cartoon below Herald Sun cartoonist correctly perceives that the Snowy project is really designed to rebuild Turnbull’s leadership. 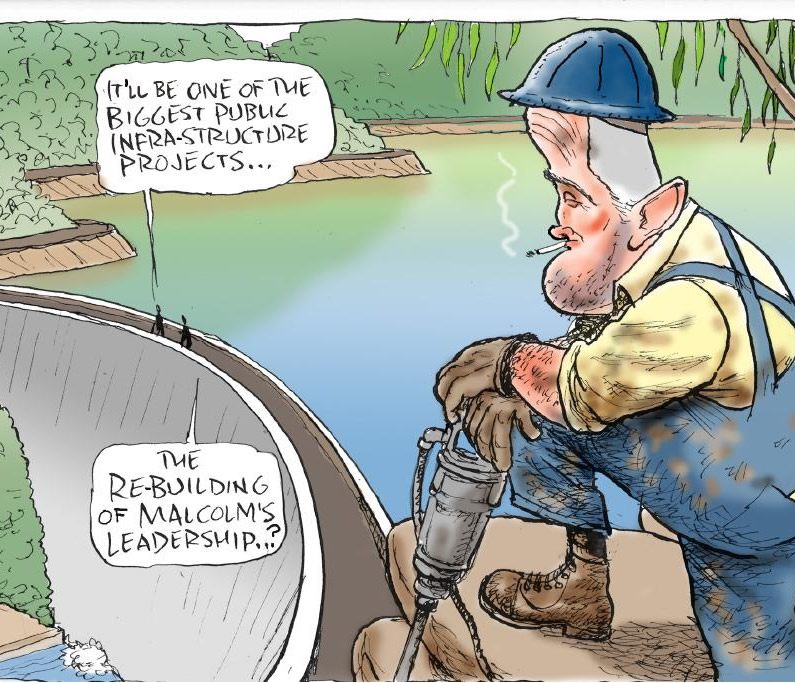 Turnbull on Shortages of Gas

Turnbull has claimed that at his meeting with gas producers he received a guarantee that enough gas will be available at times of peak energy demand to prevent blackouts. This guarantee was made after he reminded producers that the Commonwealth has the power to limit gas exports if they don’t comply. The likely adverse effects of such a decision on foreign investment in Australia, and on our credit rating, suggest it is bluff.

But why has this alleged crisis situation arisen seemingly “out of the blue”?  He must have known that his government’s legally backed regulations have been leading to a reduced usage of coal powered energy (not to mention new investments) and an increased resort to usage of renewable sources. But as noted the federal policy on the use of renewable has to be kept lower than the Opposition’s and is anyway  limited politically because Abbott had it lowered to 23.5% . Hence an increased usage of gas is the only realistic alternative to meeting increased energy demand when the shortage is predicted to arise next year. Note also that gas adds to carbon emissions. This should have been recognised some time ago and alternative policies implemented. Even now the achievement of the guarantee that gas will be available to prevent blackouts requires  “more work to be done”. Some reports suggest that some gas producers are not keen to be involved in the guarantee.

One alternative not publicly considered is to put a moratorium on the 23.5 per cent renewable target until more tangible analyses becomes available about the scientific basis for policies designed to reduce usage of fossil fuels. Or lower the target to existing usage levels. Better still would be to drop the target altogether. Turnbull has previously stated that coal-power will be used in the future. But it will steadily diminish unless the government’s climate policy changes to recognising  that the dangerous warming thesis is out of date and needs to be abandoned.

Leaving aside the question raised about climate policy, the Turnbull initiatives on energy policy pose many questions as to substance and will likely lead to increased controversy in Parliament when it resumes next week. Controversy may also increase within the Coalition. Whether Turnbull will handle such controversy is moot, particularly if the next Newspoll shows a further fall.