It is difficult to find much in the way of compliments for the 2017-18 estimated budget presented by the Turnbull government, or for the budget  projections (not estimates) for the following three years. It appears, rather, to involve the abandonment of the policy of “smaller government”, but without saying so. Indeed it is difficult to say what the Liberal Party under Turnbull now stands for. Various remarks made in public by Turnbull and Scott Morrison left something to be desired in regard to the functioning of the economy, particularly in regard to justifying (sic) the levy on major banks, and presenting an encouraging message. Several commentators have suggested that the rationale is to adopt policies similar to those pursued by Labor in the hope that this will improve the Coalition’s polling. Shorten has rejected this and will doubtless have more to say about it in his reply on Thursday evening (but he will likely retain the deficit levy on higher income groups, which the Coalition says it will abolish as promised ).

This is not the place to try to examine in detail the various policies and announcements, which are already well covered in the media. I confine myself here to focussing on the main budget aggregates as highlighted in Budget Paper No 1. These provide an indication of the policy approach by the government.  In doing so it needs to be recognised that the margin for error tends to be greater for the three years after 2017-18.  The table below from Budget Paper No1, which is not fully legible, shows that:

A number of excellent comments have been made but I have attached only three, Andrew Bolt and two by Terry McCrann (Federal Budget 2017 and Scott Morrison’s stick ‘em up). Bolt describes the budget as “a Labor Budget” and suggests we should “Be afraid, Very Afraid” of what would happen with a Labor victory. McCrann describes the budget as a “dangerous disgrace” and characterises Scott Morrison as the “Willie Sutton” of treasurers (Sutton was apparently a US bank robber in the 1930s). McCrann also says that, when speaking on Sky news,  “Peta Credlin was exactly right. This is a budget for the next Newspoll”. But will the next Newspoll improve for the Coalition and Turnbull? It seems unlikely. 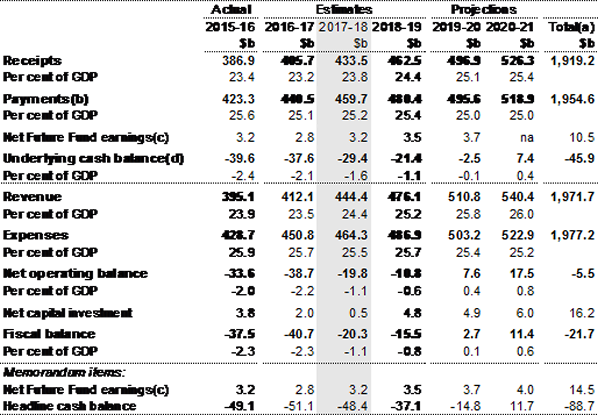