Federal Parliament does not sit again until 16 Oct (and then only for one week) and I assume there will be a Newspoll tomorrow. With Turnbull’s inability to decide an energy policy and the National Party Conference rejecting a clean energy target and voting to eliminate subsidies for renewable, the Coalition’s TPP is unlikely to increase. Indeed, with the No votes increasing on same sex marriage (but still above 50%), and No voter former PM Howard highlighting Turnbull’s failure before the vote to (at least) publish proposed protection for those opposing official legislation endorsing SS on an on-going basis , these last two weeks are more likely to have produced a fall in the TPP. That would be “exciting”.

While I have failed to have a letter published in The Australian drawing attention to, inter alia, the fact that my AGL electricity bill for September is 40 per cent higher than it was a year ago when calculated on a daily basis, expert geologist Geoff Derrick yesterday had a letter which rightly claimed that “the basic claims of climate alarmism are overstated, manipulated and in many cases simply fraudulent.” The editorial in “The Australian” concluded by saying that “to deliver the substance and differentiation needed, he (Turnbull) will have to dramatically change his stance from that of the climate warrior who crossed the floor in 2010 to vote for Kevin Rudd’s emissions trading scheme”. Enough said, one would think!

Today’s Herald Sun publishes an article by Peta Credlin saying that “it is time for the Coalition to end this farce and scrap any plans for a new Clean Energy Target – or whatever they might call it – as well as suspending the RET”. It is likely that she reflects the view of Tony Abbott, who will be addressing the sceptical Global Warming Foundation in London well before our Parliament resumes.

One might say that the longer Turnbull holds back from announcing his energy/climate policy the less will be the Coalition’s polling – although it is also true that the kind of changes reportedly being considered by Turnbull fall well short of what is desirable and needed. A report in Sunday Age claims that the 46 year old Liddell coal-fired generator, named as one that might be assisted by the Turnbull government, even purchased by it, requires $160 mn to be spent on it in order to keep it running until 2022, when it has been scheduled by AGL to close. The real question facing Turnbull is whether he is prepared to admit that he was wrong when acting as a “climate warrior” in 2010.

Relevant are the actions being taken in the US under Trump. The focus in Australia’s media and amongst many politicians (most notably in South Australia, which is currently advertising for a senior employee under the heading “Director, Climate Change” ) is that Australia is obliged to fulfil the 26-28% emissions reduction by 2030 announced in Paris. In fact there is no such obligation. Although doubtless regarded as politically too difficult, we could follow Trump and withdraw or say we will only stay in if changes are made (which Trump seems to have hinted as a possible “deal).

Although Trump’s extravagant public statements via Twitter on all manner of issues are subjected to much criticism in the US too, apart from announcing a withdrawal from Paris he has made important regulatory changes related to climate policy, including the appointment of a sceptic as head of the Environment Authority and NASA (the Aeronautical agency). Trump has also attracted support from some sceptical academics, such as Dr Tim Ball who in a recent article argues that “Whether you like Trump or not, his campaign and election represent a turning point in the human condition. It is reasonable to argue that the claim that humans were causing global warming in contradiction to the increasingly cooler weather people were experiencing, triggered a reaction. The people said you are lying to us about what is happening because you think we are too stupid to understand. We are rejecting you as academic and scientific elitist scoundrels of the left and right that you represent and are taking more control of our own destiny”.

Interestingly, Ball includes a graph showing estimates of the changes in temperatures and how the world cooled from the warmth of the Medieval Warm Period to the cold of the Little Ice Age, and the subsequent partial “recovery” from mid 1700 (see below). Note the fall in the period just before 2000 when emissions of CO2 were increasing. 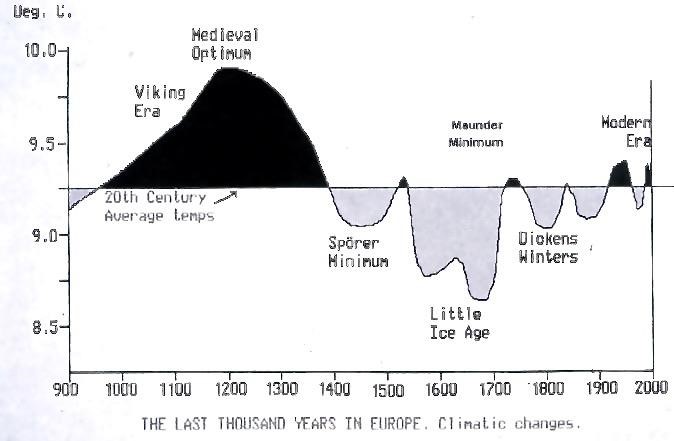 Although there is so far no indication that the man arrested was a Muslim, IS has claimed responsibility and the police have indicated that there are likely to have been others involved. The increase in the warning level to “Critical” (the highest in the UK) also points in this direction. Hopefully, it will support the UK government’s attempts in the Brexit negotiations to increase its ability to restrict migrants from the EU, including of course the many allowed into the EU from Middle East and African countries. Latest UK migrant figures suggest the sharp drop (in net terms) may reflect a belief that migrants from the EU (many of which not have not first obtained jobs) will find it harder after Brexit.  Australian immigration policy also needs to include an increase in assessments and a reduction in the high rate of admissions.

Meantime, today’s  Herald Sun reports that in Indonesia there has been an increase in so-called “radicalization” and that some 500,000 support establishing a caliphate in the country, with over 11.5 mn “prone” to radicalization (total population is more than 210 mn). The report says that the expulsion of the Robingya from Myanmar (previously Burma) is influencing Indonesian Muslims to adopt a more aggressive attitude and will likely result in more support from Muslims for those trying to establish a caliphate in the Southern Philippines.