Although as this is written more than 30% of votes still need to be counted, it now looks almost certain that Labor will be returned and may even have a majority of seats. As the ABC election expert Green says,even if Premier Palaszczuk  “falls a seat short, she doesn’t have to do any deals. She can leave it to the Parliament to vote her out, because it would be unlikely that all the crossbench would vote against them at once. “It is a fixed-term Parliament — the Government can’t just resign and walk out of office and leave someone else to form government — they can’t do that, so somebody will form government. “So it is very hard to see how anyone other than Annastacia Palaszczuk can form government in the new Parliament. “They have a certain 46, and they only need one more vote and at the moment we are giving them another two seats on a prediction.” (see Labor to Win in Qld Election). Note the failure of One Nation while the Katter party may get two seats. 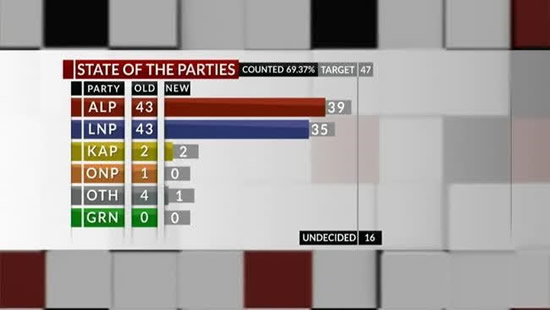 While Turnbull “explained” that the election primarily involved State issues, the reality is that it is another negative for him and increases the possibility of a loss of confidence vote against his government. In a separate report  Nationals MP Christensen blamed Malcolm Turnbull for the Liberal National Party’s poor result in regional Queensland and the rise of One Nation. Christensen who has threatened to cross the floor to help establish an inquiry into the banks, said he was “sorry” the LNP had let down Queenslanders who deserted them. He put “a lot” of the blame on the leadership and policy direction of the Turnbull government. “To Queenslanders who voted One Nation, I’m sorry we in the LNP let you down,” Mr Christensen tweeted this morning. “We need to listen more, work harder, stand up more for conservative values and regional Queensland do better to win your trust and vote.“A lot of that rests with the Turnbull government, its leadership and policy direction.”

In my Commentary last Friday I drew attention to various reports and analyses which suggested major deficiencies in the National Energy Guarantee (NEG) scheme and that no agreement had been reached with the States at the 24 November COAG meeting on its implementation. I have now obtained a copy of the following relevant documents and attach copies of them:

The Modelling Report of  NEG dated 20 November requires further examination. But it was presumably provided to the meeting of the COAG Energy Council on 24 November with the aim of obtaining the agreement of the States to use it as the basis of electricity policy. In mid-October Turnbull and Frydenberg said that more detailed modelling of the savings would be presented to that already scheduled COAG meeting.

Yet the Executive Summary of the Modelling Report says that “the COAG Energy Council is being asked to consider approving further work by the ESB on the design of the Guarantee. If there is agreement to this further work the ESB would anticipate undertaking a thorough and comprehensive consultation process with a wide range of industry, consumer and government stakeholders. This process would allow all interested parties to engage in the detailed design of all elements of the policy.  It is anticipated that the ESB would be able to provide a preliminary design approach to Ministers for consideration at the COAG Energy Council meeting scheduled for April 2018 and then a final design recommendation including required legislative and rule changes for approval in July. It is envisaged that this work would be in conjunction with the work being done by the ESB and the COAG Energy Council to implement the recommendations from the Finkel Review”.

Along with the other two documents, this confirms that there is a long way to go before there will be any agreement on NEG as the basis of energy policy. This of course relates to a policy based on that developed by the Chief Scientist, whose basic approach is mistakenly governed by the dangerous warming thesis.

This is another example of the problem faced by Turnbull in developing and presenting coherent policies.