A huge amount has been written about the 2018-19 Budget presented on Tuesday by Treasurer Scott Morrison as a 7 year plan to make personal income tax “lower, simpler and fairer” (see Morrison on Effect of Tax Cuts). But the proposed changes in the structure of the income tax system are not worth considering other than as possible thoughts for  future budgets. There will be at least three more elections by 2025 and many thoughts raised or proposed about the structure. It is already apparent that the proposed changes in the tax treatment of those on high incomes will not get through the Senate and neither will the already proposed further reductions in company tax.

The proposed structural tax changes in this budget may, in part, be included to divert attention away from the absence of any significant changes in the levels of taxation and government expenditure included in the budget itself. The large proposed spending on infrastructure, of which Turnbull has sought to portray himself as instigator, does not impinge on the underlying cash result, which is estimated to now be in a miniscule surplus in 2019-20 (previously in 2020-21).

In my pre-Budget Commentary I asked whether the budget would meet the Coalition’s “small government” objective and suggested that the widely foreshadowed reductions in taxes would be limited  because of the failure of the Coalition to effect a more substantive reduction in the budget deficit of $48.5 bn which Labor left it in 2013-14 and which was still at $23.6 bn (1.3 per cent of GDP) in the Mid-Year estimates for the current financial year (2017-18). I said that expert analysts predicted that  the reductions would likely be limited to only about $8bn, which would be a reduction of only about 2 per cent of total taxes.

In fact, the budget provides that, even after allowing for the much flaunted income tax cuts, total  individual income tax payments are estimated to increase by no less than 6.0 % in 2018-19. For the four years to 2021 the estimate of the cuts is only $11.6 bn, which means that the tax cuts over those 4 years would only reduce the collection of income taxes by slightly more than 1 per cent from what they would otherwise be (for comparison, the estimate/projection of income taxes for the four years is now $954bn).

The cuts in total taxation over the four years are fractionally more than $11.6bn (see below the Tax Outlook published in Budget Paper No 1 for 2018-19 which shows the small amount of policy decisions). 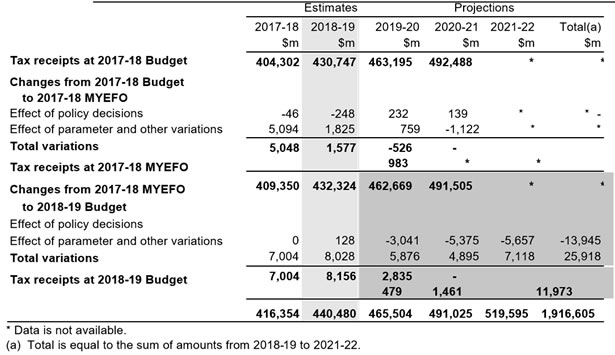 The foregoing assessment of the Budget in regard to tax cuts has similarities when the provisions for expenditure are examined. This shows that  expenditures are estimated t o increase by  3.1 per cent in real terms in 2018-19, following an increase of 2.7 per cent real in the current year. In essence, spending under the Coalition government has been increasing at about the same rate as GDP since 2013-14 and hence has not shown any sign of reducing the size of government.

The forward estimates do provide for a slower growth after 2018-19, but the next election is likely to see a return to keeping pace with GDP. With revenues estimated to be higher than spending from 2019-20 on, there is an opportunity to start reducing net debt as the Howard-Costello government did (by 2005-06 net debt was almost zero and the Federal government became a net assets holder).