The refusal of the ANU to accept a course on Western Civilisation has “inspired” support from other academics. By contrast with the Vice Chancellor at the ANU, the VC at Sydney, Michael Spence revealed on June 5 he was considering entering into a memorandum of understanding with the Ramsay Centre to collaborate on a funded course and scholarship program. Dr Spence described the course as “really interesting” and “very, very far from the kind of thing you might imagine”. “It is all primary texts: there is certainly nothing like Harold Bloom in the curriculum,” he said, referring to the prolific but polarising US literary critic.(According to Wikepedia, Bloom has inter alia surveyed the major literary works of Europe and the Americas since the 14th century, focusing on 26 works he considered representative of the Western canon, which is] the body of books, music, and art that is widely accepted –but subject to dispute- as the most important and influential in shaping Western culture).

According to The Australian, “University of Sydney academics have reacted furiously to the news, with more than 100 — including refugee and pro-Palestine activist Nick Riemer, fellow boycott Israel campaigner Jake Lynch and Tim Anderson, who courted controversy by defending Syrian leader Bashar al-Assad — signing an open letter signalling that they are “strongly opposed to the university entering into any arrangement with the Ramsay Centre. The letter, written by Dr ­Riemer and history professor Adrian Vickers, refers to “political leanings” of the Ramsay Centre board, chaired by former Liberal prime minister John ­Howard and including Tony ­Abbott. It accuses it of propagating a “conservative, culturally ­essentialist, and Eurocentric ­vision” and claims its program embodies “chauvinistic, Western essentialism”. “We are deeply disturbed by the possibility of Ramsay Centre courses being part of our institution, to say nothing of the significant and justified reputational damage that the university collectively, and its academics derivatively, would incur as a result,” the letter says. “We belong to a multicultural and hybrid society in a world traversed by serious geo­political and social animosities. Collaborating with the chauvinistic Western essentialism that the Ramsay Centre embodies would be a violation of our crucial role in promoting a ­society of diversity, inclusiveness and mutual respect.” 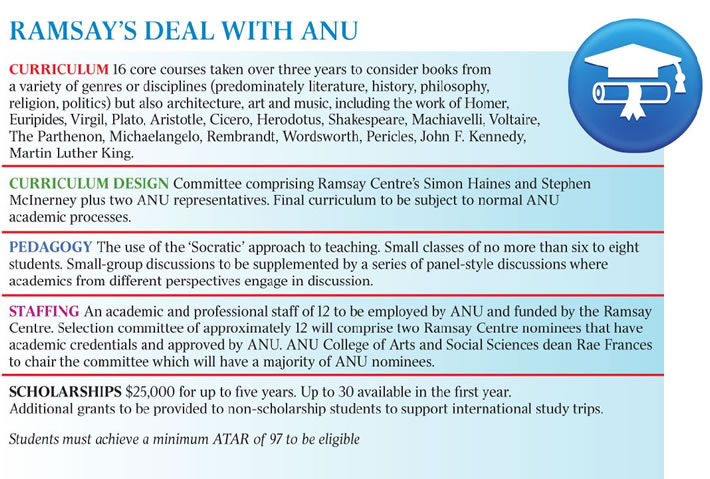 It is difficult to see how these academics would see that “reputational damage” could be incurred if the Ramsay proposal was accepted and a course taught at Sydney or ANU. Rather the opposite. Their action has almost ensured such damage – of them. My own contacts with university academics (and students) indicate that those who purport to be “modern” are often astray: in science, for example we see many academics who claim that temperatures will rise dangerously if we humans continue to have lives which use fossil fuels which have been developed under Eurocentric innovation; in music, the “Eurocentric vision” still embraces Bach and Beethoven, as does Gilbert and Sullivan; and so on.

Turnbull has indicated that he plans to talk with the ANU’s VC, although the danger there  is that both have greeny views. One hopes that Turnbull will remind Schmidt (and other VCs) that the taxpayer provides considerable funding to universities and he expects genuine diversity in available courses. It appears that the general reaction to the universities would favour “disciplinary” action. I had a brief letter published amongst a number of others published by The Australian, viz

It is useful to know from the vice-chancellor of the ANU, Prof Schmidt, that the institution is not “anti-Western values” and that the decision not to accept the Ramsay Centre proposal for a course on Western civilisation reflected no more than a possible impingement on academic autonomy.  Although not stated, this implies that the course and the staff would need first to be approved by the ANU.

But while approval by the university is naturally appropriate, was Schmidt’s concern that such a course might conceivably develop such an impingement? [(“Turnbull wants answers over axed uni course”, 8/6)].

It would also be useful to know whether the ANU’s Centre for Arab/Islamic Studies has courses and staff which are approved by the centre. [That would ameliorate concern that many have felt about reports that some staff or visiting presenters may have sought to persuade students of the merits of civilisations and policies in countries such as Iran.]

There has been considerable speculation about how Trump would handle the G7 meeting held in Canada on 8-9 June and chaired by Canadian President Trudeau. Some Australian media suggested he would be “isolated”. As it turns out, it seems more accurate to say the other way around!

First, Trump started by proposing that Russia be restored as a member (it was removed after its invasion of Crimea and its activities in Ukraine).  This was rejected by other G7 members and the only reason Trump may have proposed it is to upset the others.

Second, the G7 Communique apparently agreed by the G7 did not include any reference to the Paris Agreement on climate change, presumably because Trump would not have accepted any such reference.

Third, the Communique does include an agreement to “modernize the WTO to make it more fair as soon as possible”. It also calls on “all members of the Global Forum on Steel Excess Capacity to fully and promptly implement its recommendations. We stress the urgent need to avoid excess capacity in other sectors such as aluminum and high technology”. This appears to be consistent with Trump’s policy on changing international trade arrangements and his recent increase in tariffs on steel and aluminum imports.

Fourth, Trump has now withdrawn his agreement to the Communique because, he claims, that at a news conference after the meeting Trudeau made critical statements and indicated (probably for home consumption) “I have made it very clear to the President that it is not something we relish doing, but it is something that we absolutely will do,” Trudeau said. “As Canadians we are polite, we’re reasonable, but we also will not be pushed around.”  It is relevant that 75% of Canada exports go to the US. Read more here.

All up, it seems clear that, while Trump was isolated, he has won the first round with European/Canadian countries.  As with Canada, the members of Euro have favourable trade balances with the US. Australia has been exempted from the US tariff changes (US exports to Australia are over twice as large as our exports to the US). Of course, nobody wants a trade “war”: but Trump is in a strong position to challenge the basis on which some exports are sent to the US.